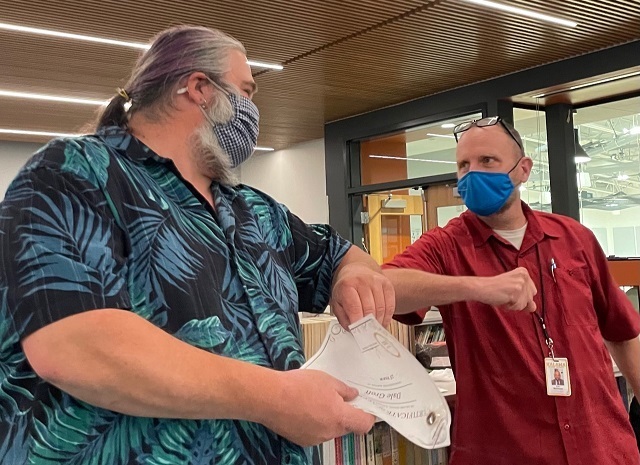 Several Kalama School District teachers and staff were recognized during the Kalama School Board meeting on Monday, May 24 for their outstanding work and dedication to students.

Tammy Smith, a Kalama Life Skills teacher who is part of the ESD 112 ESA team, was recognized for her nomination as 2020 Regional Teacher of the Year. Smith’s in-person recognition had been postponed due to the pandemic.

Smith is a teacher whose commitment to her students goes above and beyond. For example, she was the architect of the district’s “Go-Go Snack Cart,” which was a real-world opportunity for students with disabilities to engage their peers and teachers in a learning activity that combined communication, math and problem solving.

“She (Smith) was able to convey to the kids how much she cared about them, and from that you could see how much they cared about her,” he said. “Parents were really struck by her willingness to provide opportunities for ALL kids that she taught, and how she made kids feel safe.”

Dennis Watts, a member of Kalama School District’s maintenance team, was recognized on Monday after being named the 2020 School Employee of the Year by the Kalama Chamber of Commerce.

Watts, who has worked for the district for eight years, has played a significant role during the past two COVID-impacted school years, helping to keep district facilities clean, presentable and, most importantly, safe for staff, students and the community.

“Dennis has always shown to be highly-dependable and approachable with a fantastic attitude and work ethic,” said Jeff Johnson, KSD Maintenance Director. “However, since the arrival of the COVID pandemic, Dennis has proven to be a very vital cog in the ever-changing functions of the district. He has become a leader, mentor, and has seamlessly adjusted to increasing demands for student, staff and public safety.

“With all of the challenges,” Johnson added, “Dennis has stood out as the linchpin for the operations of the district, and I cannot overstate his value…”

In addition to recognizing Smith and Watts, the following staff members were spotlighted for their years of service as part of the district’s annual Employee Service Awards: